Living with the Nature Spirits 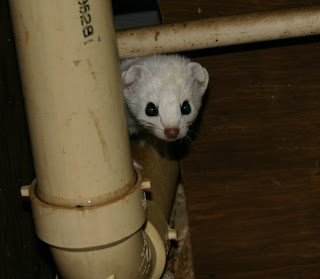 This one is known as the Chthulu Spawn. S/he eats the mice which we also live with, which would otherwise be overrunning the house. Mice which will not, simply not go near a trap, live or kill. But CS gets them.

Yes, it might be a bit disconcerting to have a wild animal living inside the house, but then again the mice are wild animals too. And cause a lot more issue with contaminating our living space. This critter, a Short-tailed or Least Weasel, aka a Stoat, currently in Ermine guise, stays in the walls or under the sink where s/he can pose for the camera. Also s/he or another is busy catching mice outside, as well. So far *knockwood* they've left the chickens alone and as long as they do they are welcome here. We have an agreement. And there are plenty of mice, which are more of a size for the taking. To get a chicken the weasel must get it while it sleeps, the hope that the others do not wake and stomp her/him to death while s/he eats what s/he can.

And they can kill chickens. In fact, I remember being told as a child by some of the "old timers" that weasels were "vampires" for they only drained the blood of chickens, didn't eat the flesh. Um, you know, even as a kid I realized that something this size wasn't going to be able to cart off a chicken 20 times bigger than it was. The best one can do is drag it a ways from the others, in hopes the others don't wake up and stomp her/him to death, eat what s/he can and then hope to come back for more. But, alas, the farmer has removed the "vampirized" chicken and a new one must be killed.

But mice are easier, they can carry off mice. And the mice are plentiful. So are voles, chipmunks and squirrels.

Should Chthulu Spawn dare enter the actual house, however, there are dogs. Four of them now, btw, as we've adopted another Border Collie/Aussie mix, named Sachairi, to help Gleann out and to balance things out with our Greyhounds, Òrlaith and Cù Mór. All three would be lethal to the little spawn of the netherworld.

All in all, we are cozied down for the winter. New wood furnace, everyone winterized more or less (the goats did take out part of a plastic window, however, you know, where in the goat pic spam post you see Elína standing in it in warmer times. They apparently are displeased with having their favorite entrance/exit taken from them, although we've had some nights where they should be appreciating it. And we have plenty of meat in our freezer, with some smoked good still to come. 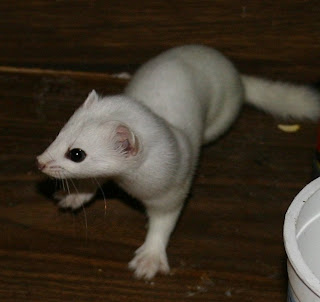