Adventures in corned beef and other foodie stuff

I think we might officially be entering the foodie world. While we have been dedicated to real food for awhile, sometimes it's hard to see us in this light, but I think it's getting hard to avoid. We're also fermenting things, that's a big step in this for us. Aaron has been the one making kefir, I've just started a batch of beet kvass.

But our big adventure has been in corned beef. The past few weeks had the subject brought up a lot due to the association with Irish American St. Patrick's Day dinners. Of course, as we're Pagan it gets drowned out a bit by all the various blather on the implications of the day. As we're more Scottishly inclined, I didn't feel a need to voice in on that and our only celebration was to go to a local coffee house to listen to music (which was a nice sociable thing to try to break out hermity ways). But there were enough mentions of corned beef and cabbage that I did start craving and then Nourshed Kitchen, a lovely blog you should check out if you're interested in real food, had this post on curing your own corned beef.

As it's awfully hard to find grass-fed corned beef on a whim, we decided to go for this. Of course, we got started rather late to do it for St. Paddy's but that's not an issue. For me corned beef is not about St. Paddy's Day or about "being Irish." It's about being a New Englander with a Québécois father. It was an important meal, cheap, hardy, filling, savory on both sides of my family. The truth is that in the Northeast corned beef isn't about a ethnicity it's about class. It's a meal of the people. Of course, for boiled dinner it's not generally just corned beef and cabbage, but a variety of root vegetables as well. Things that get through the winter, which does make it quintessentially March meal.

We have a few roast cuts from our last half-a-cow, although not a brisket apparently, but figured this piece would do although a bit more fat might have been nice. Of course, before we could start the curing of the beef, we needed to make the whey. This was something I had been intending to do as it's useful stuff and so the cream cheese which is the other side of the process. This, of course, took several days, in fact a bit more than we though it might. We went by Sally Fallon's Nourishing Traditions for this process. We did some raw milk and some raw milk yogurt, obviously the former took
longer than the latter. We skipped the celery juice as we don't have a juicer anyway and would have had to buy celery (probably not local at this time of year).


Once the whey was separated out we put the spices and salt on the meat and poured the whey over it all. We left it out for one day at room temp but the moved it into the refrigerator for 5 (or so days, we aren't remembering this the same LOL). Then we took it out and got it going in the crockpot.

We added turnips, parsnips, carrots and, of course the cabbage.This is, after all, not corned beef and cabbage but New England Boiled Dinner.

And amazingly it tasted just like New England Boiled Dinner!

We still have a few meals of it. We are also left with some cream cheese for various things, as well as more whey which allowed us to start the beet kvass.

We've been taking baby steps in to a lot of this over the years, but getting more and more into it. Cooking isn't something that we've been the strongest about, but it's an important part. Especially as I've always had health issues which makes this very important to me, both the eating as traditionally as possible and the eating a lot of traditionally fermented foods.  I am one of many I know who screwed up my system through years of vegetarianism and "mainstream" food. It's amazing to me as I look at "the big 5 0" in a few weeks that I am as healthy as I ever remember being in my adult life. And this has been largely due to eating real food. Some which we raise ourselves, some which we buy locally and all of which we prepare in traditional ways. 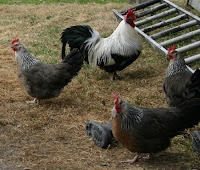 Speaking of raising, regarding the chicken hopes I mentioned awhile back, we are still not sure about the Scots Dumpies, although if we are indecisive too long the decision will be made for this year. And I am thinking that we probably won't get them this year. But we will get them. So while we considered getting White or Red Dorkings, as there are two NH farms which offer one or the other, we decided to just stick with the Silver Grays. We are going to try to breed some of ours, but as I write this there are 25 newly hatched chicks on their way here.
Posted by Saigh at 1:59 PM