And as summer starts winding down

Summer arrived, we did celebrate Bealtuinn, it was a lovely ritual and it poured rain at the point where I did the omen for the blessing...all things considered, we took that as a good blessing.  The summer came on hot though, real hot. Okay, it has not been as hot here as many places, and while a bit dry for us we have no drought, so we can't complain. Might a bit more if we got as serious with planting as we intended to, some here have been hurt by the weather...but battles of fences and goats meant we were prepared not to have much of a domestic harvest.

The chick have grown, with two more losses including the one that wasn't growing. The wild geese, which were three families this year, have grown too. One family is gone, um, as I write I'm not sure about the other two as they've both been flying but returning....today may have been the day. We'll likely see them, but not be able to pick them out, as the flocks fly south in a couple of months. We also have had one family of Mergansers born and brought up on the pond, that we know of; there is always a chance that another family might have been a bit more private about it. 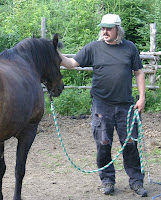 A huge part of our focus this year, what with me no longer working nights, has been us catching up on working with the horses. And while it's an all seasons thing, I wrote last year that we call our Lùnasdal celebration here "Là Fhéill Mhacha" and that we do have an even stronger focus on horses for this celebration than others, although, again, horses like dogs are always a part of what we do. It was a time of horse racing and still is of horse fairs, although as I wrote elsewhere this summer I do not believe going to or watching modern professional horse races is a very spiritual experience, especially not for the poor horses. You are, after all, supporting horse slaughter every time you do so. 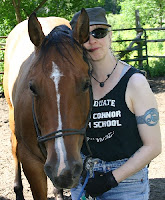 I'm feeling this celebration is very special, as this summer has been very much focused on training Saorsa, getting to know Misty, trying to keep the Mini boys from being bored. No longer working nights, I've been able to spend a lot more time out with the horses with all of us awake (you know, when it's not been too sweltering, so sometimes it is evening). Between me having more time to play with her and Misty being her herd, perhaps some maturing as well now that she's 5, Saorsa has made some great strides. In fact, it's been amazing! She's still bold and daring, but not as pushy and rude as she was.

This has included me finally riding her.We did or first trail ride on August 5th, so now our "Great Horse Unrace" can now include actual riding again. Maybe we'll even start racing for fun by next year. We'll see. We need to get boots for them first or do it in the field though, as the gravelly road does not inspire them to want to move very fast. Saorsa, in fact, acts like an old plug who has been trail riding for years. It's been three times. This is slow, steady training using Natural Horsemanship methods at work. She's been on the road many times, without a rider, after all. Having a rider seems to be nothing to her, she just was, "oh, okay, so now you're going to do all this stuff from up there? Kinda lazy, then, ain't ya?"

She's really turning into a seriously awesome horse. Um, aside from shots. She does not like shots. She is not very forgiving of shots. Shots bring back the old, scary, "I'm going to maul you now!" Saorsa.   Fortunately, in NH we can give our own shots, all of them, and the vet is more than happy with this idea (because getting to live can outweigh making money, sometimes, I mean what would he do with it if he's dead? and he's just a nice guy, anyway). Of course, this will work only as long as we don't do anything that requires certification. We don't exactly have any immediate plans to do anything other than hang out and ride here, so that's not a problem. If my dreams of doing Search and Rescue with her or any sort of fun competitions (I have no interest in showing, but do have a mild interest in mounted Cowboy shooting which I think she has the moxie for or something like that...just fun...and not economical at this point anyway, especially as the nearest mounted team I know of is in NY state).

The mares have ended up with the run of the place, actually. Did I mention we seem to be having some issues with fencing. The not very good fencing blocking off the driveways doesn't seem to be a problem, as after a

couple of adventures, neither seem to be interested in leaving us. *knockwood*  So we decided to put aside the rest of the fencing and let them wander. They come to the door to visit or to ask for help when one

loses track of the other while they graze. And Saorsa is free to swim in the pond as she likes, although Misty doesn't approve. (Despite the heat she didn't seem to do this much, perhaps because Misty was so pissed at her last May ..left hand photo....but today she ventured back in... right hand photo).   Oh, and as I typed this paragraph they just trotted by to head for the shelter of the barn, apparently it's nap time.

So, summer has been horses, walking and playing with dogs, Aaron getting more shifts with the ambulance, job hunting (I admit, him more than me), some work on building a business (me), trying to keep up training while it's broiling inside and out, working on the place and a bit of writing (me).  I actually have a few things cooking, one which I thought I'd be announcing all over the place but my own online posting of it is going to be delayed. I may be telling why over at Championing Ourselves in the next few weeks (or months), but suffice it to say that my War Goddesses article will not be seeing light until about Samhuinn either way.   Yes, it's been a good summer. We have much to celebrate...which should be within a week.
Posted by Saigh at 11:54 AM