Catching up to winter

It's the Winter Solstice and I've realized I've not yet posted about Samhuinn at all. I had a few things kicking around I was going to write about then, like the meaning of sacrifice. After all, I see a lot of people prattling on about animal sacrifice who aren't actually involved in the raising of food animals and most of it is ludicrous.  I mean some is the idea that you can by factory-farmed meat and "sacrifice" it but one bunch actually proudly proclaims they "sacrifice" the "blood" they think is in the bottom off their packages of frozen (factory-farmed no doubt) chicken. Dearies, that's not blood, that's blood tinged water and it's a waste product. You seriously offer to your Gods that which normal people throw away? I'm sorry there's something wrong with that.

Obviously, not everyone is raising any of their own food animals so doing a sacrifice is not possible. I do believe you can do a meat offering with purchased meat, but I'm going to maintain that it really should be purchased with consideration including not using factory farmed meat for offerings. Even if YOU choose to eat factory farmed meat, consider that perhaps you want to splurge if you are buying for them. There are enough resources to find pasture-raised meat in any given area, after all. But also do on think that it is the same as sacrificing an animal you raised from infancy, that you cared for and nurtured and made sure had the best life you could provide for him. Because it's just not. It's an offering.

Shortly before Samhuinn we did our chicken sacrifice, killing all but one of this year's cockerels. This did include offering the best one to the Gods. We hadn't planned on keeping any, but one little guy who had somehow worked his way into the older flock, with our older rooster, Pops, accepting him after the younger rooster, Sonny, (we don't work real hard in naming our chickens) had gone and taken over the pullets in this year's hatch. Most of the other cockerels had been separated out already, two others managed to live with Sonny okay, but this one head to take Sonny's place in the other flock. I had wanted to keep him, Aaron got me to agree to dispatch him as well, but then he escaped. Found a hole the others didn't. So I put my foot down, he might not be real big or real flashy but he was real smart so he got to live. He still lives with Pops and his hens, but we may eventually try to establish three flocks. Or not. The other factor is that if something happens to either of the other two, we have him. We seem to be calling him "Lucky" but I don't think luck had much to do with it. I think he's a bit of a con artist, but I like that about him. It's a good survival skill in the very complicated society of chickens.

I would have also liked to have written about  how things were going with the mares, but we got rain. Lots of rain. Serious ground-soaking too much mud to do much sort of rain. Which then froze the mud into nasty, hard ground.  So we didn't work with them a lot. A bit of brushing if the rain let up long enough for them to be dry, as much game playing as the mushy and then frozen ground allows. Now we have snow, well today it's turning to slush in a winter rain but I'm hoping it will turn back to snow without painfully frozen slush that resembles that painfully frozen mud. Meanwhile we seem to be settling into a nice winter routine with the four horses and the goat. 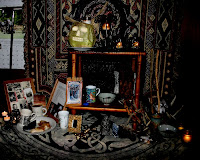 So not a lot to talk about which is why I hadn't. We survived Superstorm Sandy which actually wasn't so super by the time she got here so we were again lucky. Or, as I keep noting when others say something nasty about our weather...we found a good place, nestled here in the mountains, when it comes to storms we never seem to get the

worse. *knockswood* We celebrated Samhuinn about mid-November, had a nice fire followed by a nice meal. Aaron found a 7lb turnip for our Jack, as our swede growing attempts failed (seriously we need to figure out the goat-proof fencing thing better). So this was damn nice. The meal was one of our chickens with veggies, including most of the inside of the turnip...we actually had too much from it fit it all in the clay cooker. Next year hope to grow our own but matching this size might take a few years.

Now we're settling into winter routine. The past week has been one of sadness and contemplation. And annoyance at rampant stupidity. I think a lot of my winter will be like I am right now, surrounded by snuggling dogs, trying to write and realizing I should get out to check the outside animals and the fires soon.
Posted by Saigh at 2:42 PM 2 comments: Links to this post