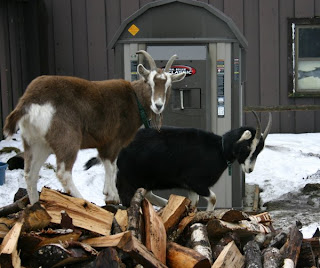 The goats helping with the wood pile, this is early before we got real snow

While much of what gets discussed in the Pagan communities about the holidays are debates on ritual design, what day to celebrate, what the holiday means on some cosmic level, I've long been big on the idea that these were truly practical celebrations for our ancestors. They were neither about one day, although the celebration might be important, nor did the average person debate much about exactly what it meant to the Gods beyond "I hope what we do will let them help us through the season." Therefore, I doubt things changed a great deal very quickly from pre-Christian to Christian times. No matter your beliefs, the seasons happen, they must be dealt with.
We don't seem to have a whole lot of information on Imbolg, this is a common lament. It's probably because it was much more a local, household based celebration with no great gatherings as there seems to have been for Bealtuinne, Lùnasdal and Samhuinn, so customs may have varied. The few things that most agree on aside from practices honoring Brighid, of course, is that the stores were counted, things were washed and your equipment for your spring jobs examined, cleaned and repaired if needed. These were undoubtedly practical necessities, meaning life or death even, for our ancestors, but for many today it's merely a theoretical acknowledgment.
For us, however, as well as other Gaelic Polytheistic preppers and homesteaders, these things actually begin to take on a new light. Because while right now if we run out of something we can, indeed, run to the store to supplement our supplies, but, well, even if we can now and even if we always can in our lifetimes, the plan is that we should have to. And so, we open our cupboards.
No matter what stage one is at in this sort of project, this is a good season to take stock and consider how well our efforts are doing. We knew we'd not be totally prepared with vegetation this year, and that's held true. On the other hand, we're looking at a lot of meat. We are doing well there, having bought twice as much pig as last year because Aaron was convinced we might not get half a cow again (the previous year we had a deal but it fell through when they never sold the other half and decided to not kill the cow). But we got half a cow. And some lamb, which, btw, part of will be our feast. We certainly hope to have more chickens next year, the live ones are doing well although one keeps doing poorly and then perking up so we're watching her.
After having held back on this work a bit for a few years and sort of starting over, I think we're doing well with what we expected to be doing at this time. But there is much work to get to where we need to be for next year.
And this is the time of year for that too. We consider our seed catalogs, we consider, perhaps with even more concern now that we have those goats, fencing supply catalogs. We're discussing greenhouses. We're discussing negotiating where this goes in light of where the animals go. We are in the process of cleaning out another part of the house we've not been using in part to reclaim the kitchen there as a better option for canning and such activities than our tiny one in the part we live in as well, because sometimes you need to start to prepare a season or so ahead.

This is what Imbolg means for us. Yes, there will be a celebration, at some point when we actually see some signs of spring. There will be a Brighid's cross, She'll be welcomed in and put to bed and we'll feast.
And there will be lamb, as we have no mutton. There is much debate among modern Polytheists and scholars about whether or not sheep lambed at this time and if they folk etymology truly did refer to "ewe's milk" (the actual etymology apparently refers to "washing" ...from conversations with Alexei Kondtratiev and others in the IMBAS mailing list several years ago). However, again looking at it from a homesteading perspective, if sheep are not manipulated to breed late, they do normally start lambing in January, so I think that despite those who claim that all lambs are born in March (many, but not all are now, but it takes work to do that), there is a connection.
I also believe that mutton would be a fresh meat, which seems to confuse some who are not homesteaders and feel no one would kill any of their livestock at this time. However, whether the ewes are lambing now or soon, you'd know which ones are not and likely have an idea of which would should and is not....and she's probably going to go. It's also simplistic to think that all livestock was culled in the fall, although much might be...it would likely depend on the fodder you might have, as well. If I weren't so damn tied up with work and all right now I would probably look up sources on this, but....

Eventually, perhaps we'll actually be going by the lambing of our sheep, if we decide to venture that route. Until then, we wait for some sign. This might take awhile.
Posted by Saigh at 1:17 AM 4 comments: Links to this post