Yes, I know that's an Old English song and not Celtic, but as part of my Bealtuinn practice always includes watching The Wicker Man (the original, of course) it's totally stuck in my head.  (This year we also watched The Wicker Tree. I had considered doing a review, but I don't think I'll bother anymore than I'll bother ever watching it again. No, it won't be part of our tradition. It was quite dreadful, although not as horrible as the remake with Nicolas Cage, and boring. I don't know if Hardy never did get what the actual happy accident that made The Wicker Man a Pagan cult hit or if he intentionally decided to just bore us to death but it was very sad and I'm not going to put any energy into anticipating his next film.   Anyway.....) 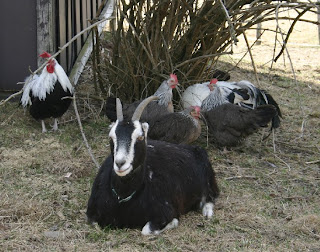 We're a couple weeks and a lot of word from celebrating as of yet. Work has begun, pastures, chickens, gardens. It's all slow but ....   We are also planning a fenced in yard and it turns out friends of ours are getting rid of theirs...so we have some chain link and some of the parts for it to use! This means we'll have a better fence than we initially were planning, only having to buy the gates and some parts and concrete. And then do the work. This will give the hounds a place to romp off leash and an area protected from the goat and the horses when they get out (which they do a lot, this spring, lots of fence work in our future there, too). We'll have some of our gardens in there, including trying to salvage some of my parents' flowers.

We're also doing a good deal more in cleaning up the entire house, making it more and more our space. This is a rather difficult thing for me, as it means going through my parents' things and changing the house from how they had it to what we need. I want to get it so that we can have company over on the A-frame side, so that not everyone who visits has to immediately deal with our crazy dog pack and to have a roomier place to sit. I also want the kitchen all fixed up for future canning and other bigger food projects. The little one in our "in-law" apartment is often difficult to work in even for what we're doing right now.

As I noted in my last post, we got another bunch of Silver Gray Dorking chicks, they arrived safely and so far 22 of the 25 are still with us. One is tiny, not growing and seems gimpy, but eats, drinks and poops and seems enthusiastic about life so we're giving her a chance. The other chicks are not picking on her, although she does get run over when they get excited (which is all the time).

In the next couple of days we intend to separate the two Dorking roosters we have along with half the Dorking hens each and one with the hybrid as well. We'll see if we can get a couple hatches, hopefully brooded by the hens, out of this. We might incubate some eggs as well.  We don't plan to keep any of the males of this batch past fall, we'll keep the two roosters we have and the new hens and try to keep the lines as diverse as we can with that.

We are not going to get the Scots Dumpies this year, unless we have some radical developments which makes all this too easy and we need to get more. We now wouldn't be able to until July, which is rather late and I'd rather aim for next year. And get more experience with these guys.  I do intend to have the Dumpies some day, I really do. However, I also want a lot of things set up better, because we really want to be able to make major strides in knowing how to breed and keep the flock thriving before we attempt it. And, honestly, I love the Dorkings, they are a beautiful and quite nice birds.


The past week or so has been chilly to cold. We had snow a few days ago and night temps in the teens. This after hot weather in March. I'm a bit concerned about a lot of our trees and bushes, as they had been budding when this hit, and some of our perennials were up and may now be done for the season early. And others might not make it this year.  Fortunately, we hadn't been fooled into planting anything outdoors yet.

We've been exploring the land a bit, it's nice to together now, as for years our schedules didn't allow. Yesterday we heard coywolf puppies not far from here while walking the fuzzy dogs. Aaron kept them with him while I followed the sound. It was distressed, although I knew I wouldn't go too close or interfere if I did find them as there is seldom a reason to. The adults were likely off hunting. They went quiet as I got close, I looked around, hoping to see an adult returning having heard them too and probably close enough to know we were there. I didn't actually look for the den, just tried to see if I could make out where there might have been more activity. I am hoping they don't feel a need to move them, as I didn't find them, and I will try staking out the area when the pups are a bit older to see if I can get any photos. I went back to Aaron and the dogs, awhile later we heard the pups again, this time a very different cry which likely indicated the adults coming back.  I love these beasts. Yes, I know that seems odd to some that a chicken farmer says that, but it's my duty to protect the chickens without harming the possible competition.
Posted by Saigh at 5:41 PM